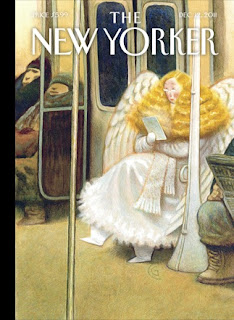 I enjoyed this story more than any I’ve read in The New Yorker in some time. According to the Q&A with Nathan Englander, it is the title story to a collection he’s bringing out in February. And, as anyone might guess from the title, the story has parallels with the great Raymond Carver story, “What We Talk About When We Talk About Love.” (Here’s an essay about the Carver story, for anyone who needs a refresher: “Carver’s Couples Talk about Love.”) The connections to Carver’s story are interesting, but Englander’s story absolutely stands on its own.

The story gives us two couples. Mark and Lauren are visiting Florida from Israel, where they have lived for many years, having converted to ultra-Orthodox Judaism (and adopted the names Yerucham and Shoshona). They come to see Debbie, Lauren’s old friend from school, and her husband, the narrator. The narrator at first is bothered by the visitors, and everything about them grates with him. When he offers Mark a drink, though, it turns out that they can share this, at least, and they begin to consume a bottle of vodka. Soon everyone is getting along better, jokes are cracked, etc., and it is then revealed that Debbie and Lauren used to get high when they were younger. And that leads to the two couples smoking dope that Debbie has found in her son’s things, which is a shock to the narrator. But as the four get high, they move into darker territory, eventually playing the “Anne Frank game,” which is speculating about who would and who would not protect you when the next Holocaust comes. This is obviously a serious topic, but on the page it’s quite funny.

Debbie is somewhat obsessed with the Holocaust, and the narrator kids her about it. It would have been a different story, of course, but I might have wanted someone to point out that if a Holocaust comes in America, the signs are pointing to Muslims, not Jews, being its victims. But that’s beside the point. The story also addresses religious purity, and the question of Jewish culture versus Jewish religion.

It seems to me that the magazine often saves some of its strongest work for the end of the year, and this story is no exception to that trend.

Story of the year material?
Posted by Unknown at 1:48 PM

I definitely saw echo's of Carver's Cathedral in this one as well.

I'm late in reading this but yes, I would definitely say story of the year material.

Now that I've read this, I must read the story -- perhaps I'll buy the collection.

Brilliant - now among my favourite short stories - despite ending being a fraction abrupt. Unfortunately accessible online only to subscribers!