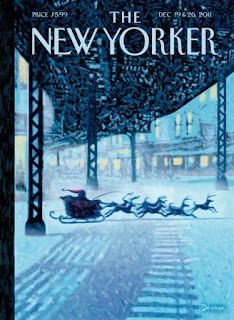 The New Yorker’s Holiday Present to you—a story (and quite a good one, at that) that isn’t behind the paywall. This story reminds me somewhat of the Alice Munro story, “Axis,” from earlier in the year, since it involves the passage of a long time after youthful sex, and also deals with a geological formation that plays at least a symbolic role in the story.

Here, sixty-something Verna is on an Arctic cruise, thinking of getting back in the game after taking some time off following the death of her fourth husband. She’s calculating and smart, and she knows she’s better staying away from the married men. But she notices one, a “Bob,” and makes her approach.

Although he doesn’t remember her, she remembers him quite well—he raped her some 50 years earlier when she was 14. She’d been a sheltered girl up until that point, but she became pregnant, had to give the child up, and never recovered. She begins to plot her revenge . . .

Don’t read the Q&A with Margaret Atwood until you’ve read the story, but be sure and read it. There isn’t much more to say about it beyond what Atwood says. And I won’t discuss it further to avoid spoilers. (Usually in New Yorker stories that doesn’t matter much, but it does in this one.)
Posted by Unknown at 7:09 PM

Loved the story, loved how it made me feel about Verna. I haven't read Atwood in a while but thie story malde me plan to go back to her.

I found this story mannered and dull, little better than a creative writing class exercise. A woman, now fully in control of things, waits until the end of her life to gain bloody revenge on, apparently, all of the men who ever abused her -- those who introduced her, against her will, to sex; those who bored her in marriage; and, if this story is the precursor to a novel, probably scores of others. Atwood is marvelous, and full of humor, when she creates fully realized characters with whom the reader can identify. She is preachy and dull when she dabbles in science fiction or creates flat, highly plotted characters such as the protagonist here. "The first thing we do, let's kill all the men."

The story completely explained a former fiance's nuances in her troubled life. I think she let me go, deciding I wasn't 'one of those' whom she dedicated her life to getting even about.

Quickly this site will indisputably be famous among all blogging people, because of its fastidious articles or reviews.Mattress Protector

These are truly amongst the wonderful informative blogs.
cheap furniture

It was great to see the old printshop and everyone who works there again. I am excited to see a printing business still operating and growing, great job guys
memory foam off-gassing