The New Yorker: "What Have You Done?" by Ben Marcus 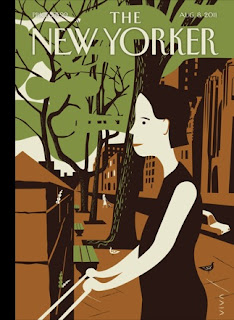 August 8, 2011: “What Have You Done?” by Ben Marcus
This story is a little sneaky. Paul is the point of view character/protagonist, and this is his voice, although the story is told in third person. He knows something that he’s not telling us, the readers, because he’s also not telling the other people in the story—his parents and his sister and brother-in-law. On the other hand, his concealing his secret (I guess I shouldn’t reveal it either?) is the point.
Paul has returned to his hometown of Cleveland, where he hasn’t been for some time. But there’s a family reunion, and so here he is. He’s met at the airport—at this point, the reader wonders if there’s some family tragedy that has occurred that brings him home—by his father, his sister, and the brother-in-law. Everyone except his mother. Paul thinks everyone is uncomfortable with him. (They are. And there’s a reason for that, too.)
But Paul is doing okay for himself, although when he tries to explain this to the family no one believes him. Which, naturally, frustrates him. His tendency to become nasty emerges. But at the family reunion, he mostly behaves himself, and even has a good time, although being back in Cleveland brings out the worst in him. Until he realizes this and he has to leave early and go home. To his home, not his parents home. Which is when the climactic scene with the mother happens.
I enjoyed the story a lot, because the character of Paul is so flawed and neurotic. With such characters, everything they do is a surprise, and Paul is no exception. And what’s it all about? Coming home, for one thing. Paul’s perceptions of what Cleveland is are colored by the presence of his family, in which he no longer fits. It’s also about building—Paul’s father was a contractor, Paul a woodworker who notices architecture—and about creating the future. But it’s also a great portrait of Paul, who is fat, seems sexually immature, and has some anger management issues.
Check out the interview with Ben Marcus, too, that sheds additional light on the story.
Posted by Unknown at 4:15 PM

Ben Marcus's short story "What Have You Done?" hit disturbingly close to home for me. Like the story's anti-hero Paul, I come from a family where the worst has always been expected of me. These bad expectations are predicated on youthful indiscretions which were neither unusual nor long-lasting. The worst part is that, despite the fact that I'm now a middle-aged, upper-income professional with a graduate degree and a life of my own, my family can only see me as an acne-faced teenage malcontent who didn't score high enough on the SAT to get into Yale.

In any event, "What Have You Done?" paints a bleak and spot-on portrait of family dysfunction. Paul plays the role of scapegoat in his family. The more the family expects Paul to be dysfuctional, the more dysfunctional he acts. In turn, this only validates the expectations of his family members. As many of us have discovered, this vicious cycle can only be undone by Paul removing himself from the equation.

We all make mistakes in life, but the hope is that families will support their members through difficult times, then celebrate their accomplishments when the hard times have passed. The terrible truth, however, is that some families cling to the past like a soiled-yet-comfortable blanket and prevent some of their neediest members from being able to move forward. Marcus tackles this difficult subject matter with incredible tact and precision.

The bottom line is that "What Have You Done?" is a must-read for anyone who is estranged from her/his family. For both the character Paul and far too many of us in society, the answer to the loaded question "What Have You Done?" is: "Nothing. I've just tried to live my life and become a productive adult." As Paul finds out though, that answer doesn't matter because they won't believe you anyway.

I held my breath during Paul's encounters with his family. To envision those realistic scenes was embarrassing, as if I were listening in on a private and painful moment. I wanted to enter the story and take Paul away from the chaos to a place of safety while screaming words of retribution to those remaining.
I cringe to think how many " Pauls" are suffering daily destruction at tthe hands of "loved ones."