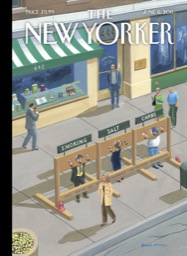 June 6: “Clever Girl” by Tessa Hadley
I may be forgetting someone, but it seems to me that TNY has published more stories by Tessa Hadley than anyone else over the last couple of years. If I didn’t think this one was so good, I might be annoyed by that. (In fact, as we learn from the interview with Hadley, this story is one of a series about the same character, Stella.)
A girl whose mother remarries isn’t terribly happy about the new house they’ve moved to, even though it sounds nicer than the place they were living before. And she doesn’t get along with her stepfather, although he treats her mother well and he works hard. She’s bright, but doesn’t care much for school. In her new neighborhood, she becomes friends with a girl her age, Madeleine, but they don’t really have that much in common.
When the girl’s mother is in the hospital having a baby, she and the stepfather are thrown together. She’s struggling with a physics problem and he tries to help. He struggles with it and gives up in frustration, but in the process the answer comes to her. Not only does she understand that she’s clever, but she also sees that her stepfather is trying to be helpful: “Something had happened; I could see all the elements of the problem differently now, as if they had arranged themselves naked under a bright light.” And she’s not just talking about the physics problem.
That's about it. A nice epiphany at the end. Along the way, Stella and Madeleine develop a "tree cult" in which they convince themselves that the stumps of trees that were cleared for their housing development are alive, and those stumps look like metaphors for the girls themselves.
Posted by Unknown at 6:36 PM