The New Yorker: "Going for a Beer" by Robert Coover 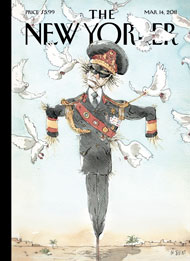 I may be referring to this story for years to come for the brilliant way time passes in every sentence. The point of view character can barely conceive of an action before he’s already completed it:

“He finds himself sitting in the neighborhood bar drinking a beer at about the same time that he began to think about going there for one. In fact, he has finished it. Perhaps he’ll have a second one, he thinks, as he downs it and asks for a third.”

And on it goes, through picking up a woman, having sex, dating, marrying, having children, having an affair, divorce, commiserating with his ex-wife’s new husband, being visited on his deathbed by his son, death.
Breathless: Life is short.
March 14, 2011: “Going for a Beer” by Robert Coover
Posted by Unknown at 1:13 PM

I've just resubscribed to the New yorker print edition after 2 years off... and this was the first short story I read. I loved it, it's so different and, yes, breathless, both flash fiction and, somehow, a novel too!

given my current state of mind I am not sure it is good to have read this but I sure do wish I had written it.

Wonderful story. I have a longer review here: http://timlepczyk.com/2011/03/08/going-for-a-beer-robert-coover-surreal-motion.html.