The New Yorker: "The Pilot" by Joshua Ferris 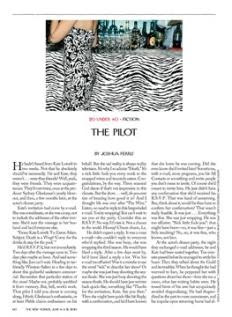 I think we’ll put this one on the best-of-the-year watch list. It’s about Lawrence, a recovering alcoholic and aspiring TV writer who is working on a script for a pilot. His agent is obscure, and Lawrence’s recent work is an underarm commercial that was shot in “tax-friendly Winston-Salem.” Lawrence obsesses about an invitation he receives from Kate Lotvelt, an actress/producer/writer whom he’s met, briefly. He worries about how he responded, he worries that she invited him by mistake, he worries that she hasn’t responded to his RSVP. Beautiful obsessing and, I have to say, totally realistic.
There’s more, of course, from whether he should invite his roommate along, to what he should wear. (I’m surprised he doesn’t obsess about what time to arrive, since that’s pretty common obsession material.) On the way to the party, he goes to a bar, even though his mother has called as she does every day so that he will promise her that he won’t drink. In the bar, though, after he’s ordered the drink he’s promised he won’t have, he gets a sign to straighten up, and so he leaves without drinking.
And then he gets to the party, still obsessing. This is all beautifully done. He wants to present his pilot—he’s carrying pages—to Kate. As readers, we know that his pilot is derivative of the show Kate has just finished work on. He chats with her—after he reminds her who he is—but he doesn’t show her the pages. And when she moves on to another conversation, he begins to drink. From there, the ending is inevitable.
Good stuff. Ferris belongs on that “20 Under 40” list that this story is a part of.
[available online only to subscribers, but check out the Q&A with Joshua Ferris]
June 14 & 21, 2010
“The Pilot” by Joshua Ferris
Posted by Unknown at 6:05 PM

Highly influenced by David Foster Wallace, I think. Or at least, how DFW would have written if he could have done without those pretentious mannerisms and look-at-how-original-I-am ultra-long sentences.

As for this story by Ferris, I don't like it at all.

The ending is corny, the plot structure is banal, and the obsession-narrative is crudely imitative of DFW.

Hard to see this being among the best stories of this year, if the story is examined with an unbiased eye without being unduly prejudiced by his wonderful previous work.

Hmm...I loved Then We Came to the End, but this left me cold. I didn't care about this guy one bit, so the obsession was tedious and uninteresting to me.

Possibly I identify with the neurotic Lawrence a bit too much!

Only reading this one now, not exactly worth the wait, unfortunately. I, too, found the obsession tedious - the repetitive narrative sounded like a poor man's Beckett. The dialogue, and the small revelations of the different characters through that dialogue, was one positive.

I have to say having read most of the stories so far in the 20 under 40 issue, it leaves me very underwhelmed by the state of the short story in America. Not that I'm surprised, given it's the New Yorker. I hope, and don't really believe, this represents the best out there, but it may represent the prevailing style.

Surely many of the twelve remaining stories will be of a higher quality, I hope so.

I considered the story expertly textured. It is rambling and solipsistic (note the protagonist's last name: Himshell, a huff away from one living in His Shell), and that's just the nature of the main character. We get enough proof of "[h]ow easily muddled his mind could get," and an overdose of "looping destructive gnawing thought."

Nevertheless, I did find it went overboard. The first part especially was exhausting, and I could finally breathe when someone else became involved in the story (around the point where it says, "He did, however, ask to borrow his jacket"). The voice is very convincing, with the exception of sprinkled phrases in which the diction level seems to climb artificially (e.g., "succeeded beyond the pedestrian sorrows of social anxiety"). Even so, the story deserved a doffing of the hat for maintaining that voice, and it does manage to build tension. I caught myself in a moment of anxiety when Lawrence introduces himself to Lotvelt.

With regard to technique, people looking for a model of how an interior monologue can be woven seamlessly into a third-person narrative could profit by turning to this story. I found just one slip: when the character through whose consciousness the whole story was filtered falls asleep, we are told what happens to his copy of the pilot: it "began to smolder and, in time, burn." Just for that second, the narrator slipped out of Lawrence's mind and told us things externally. I would've removed that, and wait till he wakes up to show the pages burning. That would've kept the point of view consistent throughout. Ferris's talent is undeniable.