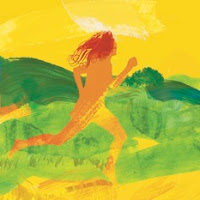 I don’t know the work of the Irish writer Claire Keegan, but I like this story very much. Although the precise conflict isn’t immediately clear, from the first paragraph, questions arise. Why is the father driving the narrator to her “mother’s people” instead of taking her home? And where is the mother. As it turns out, the girl’s parents are strapped for money. One thing they have in abundance is children: the narrator, her two younger sisters, a baby brother, and another child on the way. Her “mother’s people” though are childless it seems, and there is plenty of food and money. So the narrator is coming to live, for the summer at least.

She’s uncertain at first, but then grows comfortable in the loving household. Until, that is, she discovers—from a nosy, loudmouthed neighbor—that her relatives had a boy who drowned. Which explains their nervousness about the well, and their enormous concern when the narrator does, in fact, fall in.

But the summer comes to an end and the narrator must go home to her family. And it seems she doesn’t want to. “When I finally open my eyes and look over his shoulder, it is my father I see, coming along strong and steady, his walking stick in his hand. I hold on as though I’ll drown if I let go . . .” While her father is her “Da,” this man is “Daddy” and she’s torn between the two.

Although I don’t love the ending—it’s a bit too sentimental for my tastes—the rest of the story is a charming glimpse into rural Ireland.

UPDATE: Anonymous alerted me to the fact that Keegan has a short novel coming out in July (in the UK, as it turns out, not in the US) called Foster. On examination, this appears to be a peculiar situation where the book is an expansion on the story, rather than the story being an excerpt from the novel. From the publisher, concerning the book:

A small girl is sent to live with foster parents on a farm in rural Ireland, without knowing when she will return home. In the strangers' house, she finds a warmth and affection she has not known before and slowly begins to blossom in their care. And then a secret is revealed and suddenly, she realizes how fragile her idyll is. Winner of the Davy Byrnes Memorial Prize, "Foster" is now published in a revised and expanded version. Beautiful, sad and eerie, it is a story of astonishing emotional depth, showcasing Claire Keegan's great accomplishment and talent.

After reading this, I though it was the first chapter of a novel, not a short story. So many possible story lines. Last paragraph almost promises there is more to come.

The narrative voice here is pitch perfect. I pray there is more.

@concogs
I suppose you're right. "Foster" ist the name of a (short) novel by Ms Keegan, coming out in July.

Thanks, both. I wasn't aware of that book -- it's listed at Amazon UK, but not Amazon US, where I usually check, and the credits in TNY didn't mention a forthcoming book, which they usually do (because, let's face it, they're a shill for the publishers). But I think this case might be different from the usual "excerpt" situation, since the publisher describes the book as an "expanded" version of the story.

Although the story resonates, I feel it is complete at is. Nonetheless, I agree with concogs that the voice is wonderful and I would gladly stay with it for more pages.

I'll update the post above with this new information.

I would gladly stay with this story, too. Loved it.

I did not find this story to be sentimental at all; in fact, it seems a very understated, troubling story. Its power comes from its ambiguity and understatement. What is the secret that the girl is now keeping from her intuitive mother that something terrible has happened. I would be interested in hearing further interpretations of this story.

It's only the emotion-charged ending that I found too sentimental.

I would think the girl is hiding the fact that she fell into the well and since the people had already lost a child in that way, and she got sick, that it was a terrible secret. Her mother might never let her go back. Her foster father taught her to never miss a chance to keep her mouth shut.

I would think the girl is hiding the fact that she fell into the well and since the people had already lost a child in that way, and she got sick, that it was a terrible secret. Her mother might never let her go back. Her foster father taught her to never miss a chance to keep her mouth shut.

I was wondering if the narrator was hiding her realization that Kinsella is her father. All that talk of no secrets, no shame, spitting images, I'll never tell.

I thougt this was a beautifully written and evocative story..would gladly like to read more of this story.

I hadn't read this story before tonight. I thought it was a lovely, understated story. I wasn't fond of the very last line, but I thought everything else was perfect. I kept hoping the girl could stay with the Kinsella's. Ms. Keegan really made me feel as though I were in rural Ireland.