The New Yorker: "Fjord of Killary" by Kevin Barry 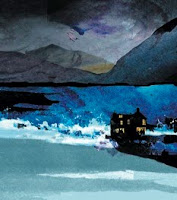 Kevin Barry has a novel coming out, but based on its title, I’d guess this story is just a story. (But I could be wrong about that; it might just be the rare excerpt that works well on its own.) Which is a good thing, as far as I’m concerned, because mostly I liked it a lot.

But first things first. Caoimhin (Irish for “Kevin”) has acquired a 350-year-old hotel (“So I bought an old hotel on the fjord of Killary,” is the first line, which I love). He had wanted to escape the city and had romanticized about what life in the country would do for his poetry (I can relate), but he hasn’t written a thing. He doesn’t seem to do a lot hotel business, either, but the bar looks to be quite busy, and provides the brilliance in this story—the snippets of dialogue about the things that are important to the local people. The story is worth reading just to see and here these people.

Caoimhin is a snob and he knows it. And the people know it. (“I was not well liked out in Killary. I was considered ‘superior.’ Of course, I was fucking superior.”) But then, I’m not sure anyone likes him, since he mentions that two ex-girlfriends had called him “funereal.”

Also on hand in the hotel are the Belarussians he’s hired to work in the place. They’re also a hoot.

The name of the hotel is Water’s Edge, and soon enough the water’s edge comes closer and closer as the fjord level rises over the sea wall. Caoimhin and the patrons are forced upstairs to escape the flood, but that doesn’t stop anyone from drinking. It does, however, provide the epiphany: “And the view was suddenly clear to me. The world opened out to its grim beyond and I realized that, at forty, one must learn the rigors of acceptance. Capitalize it: Acceptance. I needed to accept what was put before me—be it a watery grave in Ireland’s only natural fjord, or a return to the city and its grayer intensities, or a wordless exile in some steaming Cambodian swamp hole, or poems or no poems, or children or not, lovers or not, illness or otherwise, success or its absence. I would accept all that was put in my way, from here on through until I breathed my last.” And then he looks for his notebook to resume writing.

It’s a good Irish story, with a satisfying ending and laughs along the way.

I thought this was one of the better stories in the NYer of late. It is pulsing with a heightened awareness of the power and liveliness of language, something that I think one finds in the Irish people as well.

I have just got to reading this story and loved it to...loved the final line, loved the description of character.

HE SHOULD HAVE LISTENED TO CROMWELL, ' POOR BANISHED CHILDREN OF LIR'BUT LIKE THOSE CHILDREN, THEIR ' DAY WILL COME'.