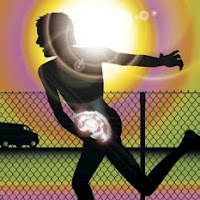 Last week’s story was very good, but this one is better. Or at least I enjoyed it more and was more compelled to keep reading. Alison is fourteen, almost fifteen. She’s a typical teen, maybe brighter than most. She does ballet, loves everyone, has an active imagination (love the thing with the talking baby deer from whom she hides the death of its mother), and looks down on the neighbor kid, Kyle, with whom she played as a kid. But Kyle, into whose point of view we shift, is also pretty normal, except that his parents keep an extremely tight leash on him. Both kids have parents who are trying to do the right thing, and have taught their kids what is expected of them.

We also shift, briefly, into the point of view of the twisted guy who is attempting to abduct Alison, and his voice is interesting, but the real highlight of this story would be the voices of Alison and Kyle as rendered solely through their interior monologues. Great stuff. I especially liked Kyle’s, given how repressive his parents are and how rebellious his thoughts are at times. He’s very tightly wound, and he’s going to explode eventually, but not today.

The story ends back in Alison’s head, which is perfect (symmetry, etc.), even though I really would love to get another glimpse of Kyle’s house when his parents find out what he’s done. Maybe Saunders will write that story. It will be a terrific read.

This story was fantastic on so many levels. Typical Saunders.

I particularly liked the idea of rulebreaking as a modern coming-of-age -- both Kyle and Alison are exposed only to the safe (and in a way terrible) banality of the shallow suburbia their parents surround them with until they break their respective parents' cardinal rules. This exposes them to both the horrors (rapist-dude) and the freedoms of the "real world" and a taste of adulthood. Especially in Kyle's case, where during his takedown of the guy he mentally shuts down his parents and remarks that he wants to "be his own man" or something like that.

Great stuff; bonus points for making a geode an important part of the story. They're SHINY.

Right enough about the themes of the story, Cliff and Anonymous, but what about the incredible language? At least from the second paragraph on, when Allison fantasizes about "{special one}," an imaginary boy watching her descend the stairs in her house, Saunders shows how the minds of all three characters are sodden with the vocabularies of bad tv drama, educationalese, advertising, self-help magazine articles, and so on. He's a genius at this. The amazing thing is the pathos he can evoke, using this melange of degraded words and phrases. And the story is hilarious.

You're definitely right, Jim. I think that's what I was getting at with my comments about "voice"--established brilliantly by the language.

I think I first read Saunders on your recommendation many years ago, Jim!

Just read this--Saunders is so wonderful. Love what James B. says about the characters being "sodden with the vocabularies..."--so well put. Like you, Cliff, I found it a bit unsatisfying not to know what happens in Kyle's house afterwards. And I wasn't sure what to make of Saunders ending with the parents talking to the girl: "You did beautiful," etc. Are the parents being gently mocked? If so, why? I thought there might end up being more to the story... but, boy, do I always enjoy Saunders.