The House on Fortune Street by Margot Livesey 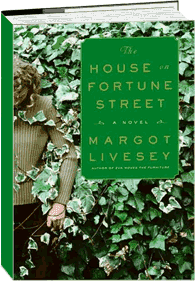 The House on Fortune Street

It’s quite possible that there are Jane Eyre parallels in this novel that I’m missing, not being familiar with that book. There are numerous references to it throughout, and one of the couples in the story is explicitly compared to a couple in Jane Eyre. And that may be all we really need to know. In any case, this novel isn’t about just one person, which I think is unfortunate because it doesn’t have the focus I’d really like.

The book is in four sections, each in the voice or from the point of view of a different character. First there is Sean, a former insurance salesman struggling to write something original about Keats for his PhD. He leaves his wife for Abigail and lives with her in the house on Fortune Street, where they have a tenant, Dara, an old friend of Abigail’s. Next is Cameron, Dara’s father, who seems quite normal until it is revealed that he has had for some time an attraction to little girls and that this is the reason Dara’s mother Fiona threw him out. He has little to do with the house on Fortune Street except that he helps Dara move in and decorate. The third section is from Dara’s point of view and the last is from Abigail’s.

These relationships are all engaging, although I didn’t find the anguish that any of the characters feels terribly convincing. Dara is sensitive because she doesn’t understand why her father left suddenly when she was a child. Abigail can’t commit because her own parents were cold and because she fears poverty. Sean is . . . well Sean’s motivations are muddy, as are Cameron’s. The Abigail-Sean story is interesting, mostly because Abigail is unusual, and I could imagine a focus there. Cameron-Dara is also interesting, taking up the middle two sections of the book, but Cameron’s weakness doesn’t seem sufficiently awful—he only takes pictures, he never acted on his impulse as far as we’re aware—to have caused the harm that it did. Dara’s lover is married (the Jane Eyre parallel), but he’s not in the picture enough to really understand her depression.

Overall, while I enjoyed Livesey’s language and her digressive syntax, and I was engaged by all of these characters, I didn’t find the novel satisfying because it lacked focus.
Posted by Unknown at 6:29 AM

Email ThisBlogThis!Share to TwitterShare to FacebookShare to Pinterest
Labels: Books