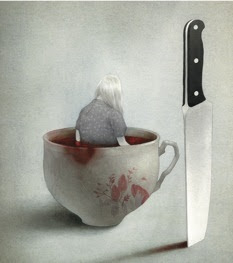 So in my expectation of a Munro story I was off by a couple of weeks. At least this story, by one of the modern masters, is a good one. It’s echo of Flannery O’Connor is interesting, in the way that Nita interacts with her unwanted visitor, and I suppose any author who is working with such a situation would be conscious of that echo. Here we have Nita, a woman whose cancer is in remission but who has also just suffered the loss of her husband who was considerably older. Because of her illness, she can’t even drown her sorrows with wine or vodka as her friends would wish. Instead, she’s living quietly and, so it seems, gathering strength. She isn’t suicidal, but her will to live isn’t exactly glowing. She receives a visit from a man and lets him in the house when he says he’s there to check the fuse box. This is a lame con, the reader knows, but Nita is vulnerable (in an invulnerable sort of way, since she knows no one can do to her any more than the cancer is doing already) and, maybe, happy for the company. But, of course, the reader was right to worry about this guy and the story then turns on the fantastic dialogue the two have. To say more might spoil the enjoyment of that scene, so let me just say that the reader falls in love with Nita for her brilliance and her pain. And then comes the end. What exactly did Nita do? Best story of the year so far, no question.

Thanks for the tip/recommendation, Cliff. Just read the story last night and agree it's the best of The New Yorker so far this year. Also, one of the better Alice Munro stories I've read in a while.

I enjoyed it, too - definitely one of the best in a long time.

I just read it and will chime in with more enjoyment.
I actually thought it was a little slow and repetitive to start with, and was wondering if I was going to be able to fall into it, but then I did. I've only read a couple this year, but this was my fave.

but...what do you mean, what did Nita do?

I will say what I love most: fiction saves her life!

What I meant was, without revealing too much of the plot, did she do what I think she did?

if you want to discuss, I posted the story on my blog and don't mind giving away the plot since I don't get many readers. (my blog isn't literary per se).

Hopefully, enough time has elapsed that I can be forgiven for spoiling the plot. I think that you think that Nita spiked the visitor's wine. If so, then unfortunately you are clearly wrong and have simply not read carefully enough. (Apologies if you intended something else.) You are forgetting the detail that the visitor drank large quantities of the wine. I don't want to spend time digging up the exact quote but it's something like "She noticed that the bottle seemed almost empty." This detail would simply not have made sense if the author intended us to suspect that there was possible doctoring.

I'm not forgetting that detail, Paul. I find the intruder's death too convenient.

Interesting response, Clifford. I'm a bit out of place perhaps here, because all other bloggers here are established literary artists with lots of publications in literary magazines whereas all I do is sit at my office churning out software for a bank.

My dullard's view is that the death is indeed too convenient, and that in fact the story is not as good as you think it is, and that the spiked-drink hypothesis has no foundation whatsoever.

Paul, you are in the majority in your disagreement with me over my suspicion about what Nita did. And the wine is an explanation for the accident. As I've said, unless there was something intentional in Nita's actions, that ending weakens the story for me.

Cliff, I agree with you the ending is weak and too convenient. I also found it unconvincing that the murderer did not have any suspicion of why Nita would tell him her "crime." To me this is another well-crafted story, very entertaining, but not without holes that can't stand up to close scrutiny. But I enjoyed it and even learned something new about plotting.

One question, why do you think Munro uses present tense in one and only one of the sections? I have my guess but want to hear yours first.

Do you mean the section where the guy is telling how he killed his family? I hadn't noticed it before. That's in the "historical present" right? Using present tense to relate a past event. I suppose it could be because the guy in the story is reliving the experience as he tells it. From Munro's perspective I suppose it makes that telling all the more chilling for its immediacy.

What's your thought on it?

No, that's not it. The present tense is actually in the second section, on the first page, following "Rich died in June." And it only lasts for two paragraphs.

Interesting. I hadn't noticed that. What's your theory? Because I don't have one!

Well, at first I thought that's on purpose, perhaps the section is a scene AFTER the killer intrusion. Munro sometimes does that, like a reverse timeline or something. I really like it when she does it well. But a careful reread shows no indication that's the case here. Further, from my initial read I had the impression of two separate stories, one about Nita's dealing with her husband's death, another about the killer. For example, in the first part Nita is going to the cellar, which reads like a foreshadow for something, but there is never a follow-up. In the second part, the killer calls a Polar camera "this wonderful new camera," like someone talking in the 70s or even 60s, while the story is set in a time after 2004. Shouldn't he be using a digital camera instead? So my guess is that Munro was putting an old piece of writing and a newer, totally different one, together. The two paragraphs in present tense is simply a slip. Otherwise her patching is quite successful, clever really.

One should never neglect simple answers to seemingly complex questions. The reason the present tense is used in the passage discussed by Xujun and Cliff is simply that the present tense is what the author means. When Munro writes "She gets up early..." she means that Nita gets up early every day in midsummer. "She got up early" would not correspond to the meaning of the story because Munro doesn't want to focus on a specific morning where Munro rose early.

I think Xujun alludes to another problem which turns out to be non-existent with regard to the camera. The killer's reference to his "wonderful, new camera" is fully consistent with his comically crude lack of sophistication. It's a POV question, and Munro is spot-on. The reader knows that such a camera is not "wonderful" or "new" but the speaker doesn't. It's an effective type of humour.

The cellar reference is another non-problem. Nita is somewhat obsessed with each room after Rich dies. She therefore visits and reflects on the cellar, as well as the bathrooms etc. I see no problem or lack of resolution about Nita's visit to the cellar or her visits to the bathrooms etc.

So I don't at all buy Xujun's theory about two stories being patched together.

Having said all that, I agree with many comments by Xujun, Cliff, and all other bloggers. And I am once more impressed by the literary accomplishments of everyone on this thread except myself. Xujun has a very interesting blog and collection of published work, as do the other bloggers.

Actually, Xujun are right that the present tense in the second paragraph is something that needs explaining. Good observation on Xujun's part.

Thanks, Paul. I enjoyed reading your comments. You have lots of good points.

Xujun, I loved your insights too. This story started a really excellent discussion! Also, I look forward to reading some of your own work and the work of the other bloggers. Previously, I've harped on a bit about the fact that I seem to be the only one here who doesn't submit fiction for publication. What can be done to publicize this website and discussions outside the academic literary community?